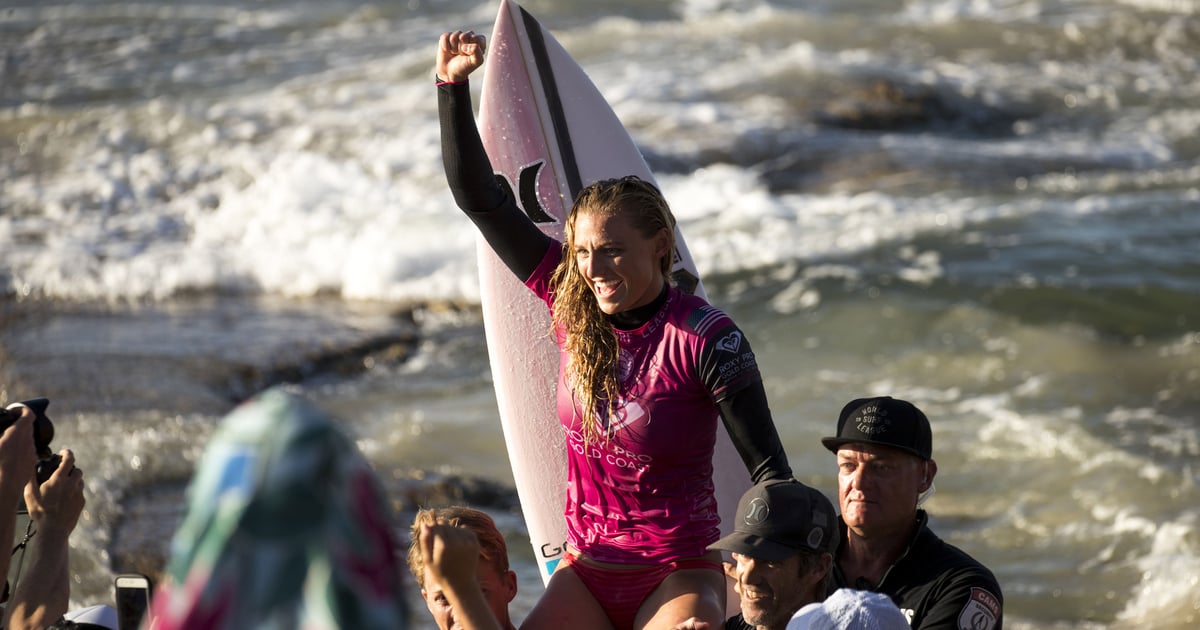 Lakey Peterson’s first official year as a pro surfer on the WSL Women’s World Championship Tour was 2012. She’d just turned 17 and now says she’s “super thankful” that her parents allowed her do what she loved and follow her passions from a young age. Lakey recently won the Freshwater Pro, the seventh stop on the Championship Tour, which propelled her into second place in the world rankings. It was her second win of the tour, and prior to this victory, POPSUGAR spoke with her about riding waves.

Lakey, who turns 25 on Sept. 30, told us that her next goal (besides winning the world title at the end of the season) is to qualify for Tokyo 2020, where surfing will be featured as an Olympic sport for the first time. She’ll find out as soon as November if she’s made the cut. Two women and two men will compete for each country, and those spots are filled based on how you rank at the end of the World Tour. “It’s really competitive with girls from the United States that are in the top five right now,” she said. “So, we’ll know once the season finishes, depending on where my rankings fall.” (Note: Lakey was the runner-up for the world title at last year’s tour.)

If — or “when,” Lakey says — she makes it to Tokyo, her goal is to win, though it’s also to live in the experience. “Winning would obviously be my main goal, but with that, just enjoying the process and not getting too overwhelmed by the beast that the Olympics is and everything that comes with it,” she said.

Lakey added that she’s particularly proud to be a female surfer in the sport today. For one, it’s the first year that WSL has given women and men equal prize money (we’ll save those details for a later date). Second, Lakey said, even before this, the level of surfing in female competitions “just went through the roof, and there was a lot more belief in us, and because of that, a lot more viewership.”

She told POPSUGAR that she’s in a career where she wears a bikini in front of “tons of people every day” — and though she admits that she’s never felt insecure, per se, about her body, being aware of that fact is a lot to take on. “I’ve always felt pretty confident in myself, but that being said, there’s judgment,” she admitted. “I think when you’re younger, especially on tour, that’s a way bigger deal.” At the end of the day, she wants to encourage people, especially young girls, to just be who they are.

Lakey appeared in the 2019 ESPN Body Issue. She posed nude with her surf board and said she didn’t want her photos to come across as “seductive;” she wished to portray someone who is athletic, beautiful, and whoever she wants to be. “Being fit and healthy is beautiful, and I want to encourage girls to be fit and healthy and active because I do think that is really important,” Lakey reflected. “But there’s nothing to be ashamed of with your body. It’s meant to be beautiful.”